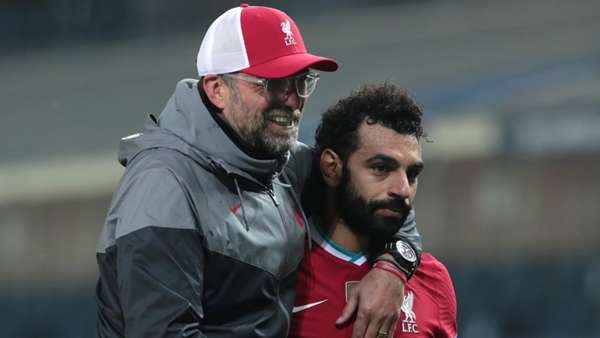 The Reds forward was upset about missing the bracelet for his team’s Champions League game with Midtjylland earlier this month.

Jurgen Klopp has revealed that he spoke to Mohamed Salah about the Egyptian’s frustration at missing the Liverpool captaincy in a match earlier this month.

But the Reds boss says Divock Origi is the player who really should have been upset with his decision.

Salah caused a stir by stating, in an interview with the Spanish publication AS last week, he had been “very disappointed” not to have received the bracelet for Liverpool’s Champions League game against FC Midtjylland on 9 December.

Salah’s former international teammate, Mohamed Aboutrika, went on to say that Salah was not happy at Anfield and that he could be sold.

Speaking to reporters ahead of his team’s Premier League clash with West Brom, Klopp was happy to clarify that there was no problem between him and Salah.

“I was a captain for a long time during my career, and I often thought it was a great job,” Klopp said. “There were not many benefits, just a lot of work with all the things around him.

“So I don’t feel the importance of being a captain. Yeah we need one like Hendo [Jordan Henderson]That is clear, but being captain of a game, I did not realize how important it can be for the players. In this world, we make a big fuss about everything, and I didn’t realize it was a great story for Trent or whatever.

“The rule here is that we have a players committee. Hendo wears the bracelet, and if he’s not playing, then he’s Milly. [James Milner]. If those two ain’t playing it’s Virgil [van Dijk] and if the three don’t play it’s Gini [Wijnaldum].

“If everyone can’t play, then he is usually the player who has been with the club the longest. And that’s how I saw it in my understanding. Trent did it because he spent more time at the club, professionally, not just in his youth career. “

He added: “Someone told me later that it would have been Divock Origi, but Div was on loan and things like that. That was my fault. I didn’t make it that complicated. It was just, ‘Trent is the longest in the club, so he has the bracelet.’

“Of course I spoke to Mo about it later. When I realized it didn’t work out so well [for him], I clarified it, and then he went back to talking about it in the interview, which is not a problem for me.

“Yes, I was disappointed, but I didn’t do it on purpose. I just did what I did, and if I made a mistake, it was that Divock Origi was not the captain that day! “

Klopp seemed puzzled that Salah’s comments to AS He had elicited such a response in England and was happy to address other issues raised in the interview, such as the fact that the 28-year-old refused to rule out a possible move to Real Madrid or Barcelona in the future.

“When Mo answered the question, it was just that these clubs might be interested and I wouldn’t rule it out,” he said.

“Imagine, if you ask any player in the world who is not playing for Barcelona or Madrid, and you ask: ‘Can you imagine playing for them one day?’ and they say: ‘No, not for them, Spain is shit!’ or whatever.

“It’s really good. Obviously, you don’t have much to talk about, so we do a long story about an interview. Okay, but it doesn’t make it more important to me. Mo is a very important player to me, obviously, but the story is not! “

When asked if Salah’s determination – he also spoke of wanting to break “all the club records” in Liverpool – made it difficult to handle, Klopp said: “It’s a challenge, I would say, in a good way. That’s my job.

That’s the job. Up to this point [with Salah] there was no problem and I don’t see any problem in the future.

“Mo’s level of motivation is very, very, very high, he stays in great shape, he works incredibly hard in his sessions, first in, last out, that sort of thing. There’s nothing you can blame him on, to be honest.

“He knows exactly what he needs if he wants to have a chance to break records. Everything is fine. These kinds of interviews, which I heard about now, they do a lot, to be honest! It’s okay, but we don’t feel it every day. “

Liverpool could welcome Milner and Xherdan Shaqiri back to their squad for Sunday’s game against West Brom. The pair have resumed full training at Kirkby after muscle injuries.

Thiago Alcantara was also photographed training with his teammates this week, but the Spaniard will take no chances this weekend as the Reds take all necessary precautions after his knee problem, which has kept him out for more than two months. .